Oppressed but not Overpowered 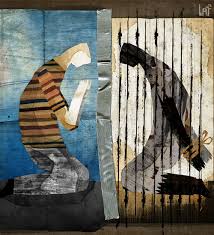 Before we carry on our look at the verse in 1Peter , I just wanted to take a very short look at a verse we find in Daniel Chapter 6 and verse 10:

“When Daniel knew that the document had been signed, he went to his house where he had windows in his upper chamber open toward Jerusalem. He got down on his knees three times a day and prayed and gave thanks before his God, as he had done previously.”

I just want to look at what we can learn from this verse in terms of facing possible persecution for believing in , and loving our Lord Jesus Christ.

I am not trying to scare anyone. Also in no am I way saying that in Britain we experience the same  mental/physical persecution like our brothers and sisters do in other areas of the world. But none the less we do still face a certain amount of discrimination,obstruction and despising of the Gospel message. The world and the country that we live in has no support or liking for the Christian faith.

“You are in a cultural context that is more non-Christian, and even anti-Christian, than even the most liberal cities in the United States. I’ve taught across Scotland, Ireland, and England. Each one is more difficult to reach than my hometown of Seattle, which is one of the historically least-churched and most secular-minded cities in America.”-Pastor Mark Driscoll , talking on Christianity in Britain.

Im sure that  you know that there are many new Christians in our generation. Many new sons and daughters that are now rescued from darkness , and we give God all the glory for that.
But as we see from history and in the world around us today, where there is an increase in Christians there is also an increase in the persecution of them. And this should not surprise us the Bible does not just say that we might face persecution for the sake of Christ , it says that we will:
“Indeed, all who desire to live a godly life in Christ Jesus will be persecuted,”- 2Timothy 3 verse 12

So if we are in this position of being faced with some type of growing persecution , how then are we to face it ?

We can provide a brief answer to this question by briefly expanding on four points that we see in the verse :

1. “When Daniel knew that the document had been signed”
At this point in his life Daniel had been made one  of three Presidents of Babylon ,  who then in turn  governed over forty Governors. So Daniel was well known , he was a high profile person at the time  that this document was signed.
This  document that the other Presidents and Governors brought before the king to sign, stated that the king was god. And anyone caught not worshiping the king would be thrown into a pit of lions.
As we see from the verse Daniel knew about this document and he knew that it had been signed. As Christians we should be aware of what our Government is doing , we should have an idea of what kind of rules and legislation’s that are being passed. Of course this isnt saying that we should have an intricate knowledge of the ins and outs of the Government. But we should make a point of finding out if the Government is trying to influence or change anything that would effect our faith.
A good site for keeping up to date with the latest developments in Government and the country in general is the ‘Christian Institute’.

2. “…he went to his house where he had windows in his upper chamber open toward Jerusalem…”
After he hears about the document being signed, instead of escaping to a place of definite safety Daniel just  heads home. When I hear all the horrific accounts of Christians being persecuted I have to admit that I sometimes think “why dont they just leave, go somewhere else and escape ?”
But they, just as with Daniel, know that Gods plans are perfect and where they are placed is part of Gods perfect plan for his children and ultimately for the cause of the Gospel.
I have no authority whatsoever  to say whether someone should stay or leave in the face of persecution. But I fully trust and believe that God will guide and make provision for his children in whatever way he leads them.

3. ” He got down on his knees three times a day and prayed and gave thanks before his God…”
We can read in the verses that follow verse ten that the other Governors and presidents knew Daniels times of prayer , they caught him whilst praying. Daniel did not stop how he praised his Lord. The fact that he prayed on his knees showed his humility. Even though he knew that he was in imminent danger he still put his God first and humbled himself before his Lord. Even in our average day living we must strive to put God first, how much more will this this apply when all else seems to be against us ?
He was not foolish, he did not pray on the rooftop nor did he stop praying altogether. He still worshiped his God in all sincerity and truth.

4. ” as he had done previously…”
By this point of his life Daniel would have been close to 80 years old. He had spent his whole life in service of God. And no effort of man was going to change his commitment or his love for his God. In his days of freedom of worship he had made a point of daily worshiping God , praising God and growing in knowledge and awe of God.
Whilst we still have freedom to do so we should strive to soak in as much of Gods word and its teachings, while it is still readily available to us. We should grow as children of God when we still have the freedom to meet together easily and to be under the teaching and preaching of the Bible.

I have no real experience of any kind of hardships or persecutions for being a Christian , so all I have said is just what I got from the verse.

1. Know what is happening in your Government.
2. God will guide your steps.
3. God still comes first.
4. Make the most of the freedom that we currently have.

“The promise to the Church is a promise of persecution, if faithful in this world, but a promise of a great inheritance and reward hereafter. In the meantime, she is to be a pilgrim body, passing through this scene, but abiding above.” – C.I Scofield